Camilla gets ass-fucked by a BBC, the photos

"With his secretary, of course," she says when she phones her friend, Franco. "Would you be able to come over for me? I'd just like to speak with you for a little bit. A couple of minutes."

Speak? We suspect that Camilla doesn't want to do much speaking, especially when she hangs up the phone and we see that she's wearing a tight dress that displays a lot of cleavage and some upskirt, too.

Ah, just as we thought!

So Franco shows up and Camilla says, "I think he's doing his secretary. Absolutely. It's happened too many times. I mean, we haven't had sex in months."

Franco can't believe it. Neither can we. This fake husband of hers is obviously an asshole.

"I just married the wrong guy," she says as she strokes Franco's leg. And before long, she's got his big, black cock in her mouth. Then he fingers her shaved pussy and makes her squirt. And that's just a prelude to Franco fucking her pussy and ass. And all this makes Camilla's fake husband an asshole for not fucking her ass all the time.

And then she went ahead and proved it. 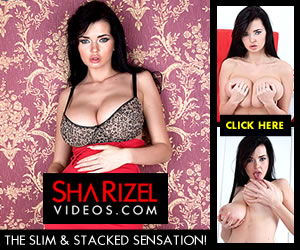