A BBC, toys and an ass-fucking for Hannah Grace

A BBC, toys and an ass-fucking for Hannah Grace 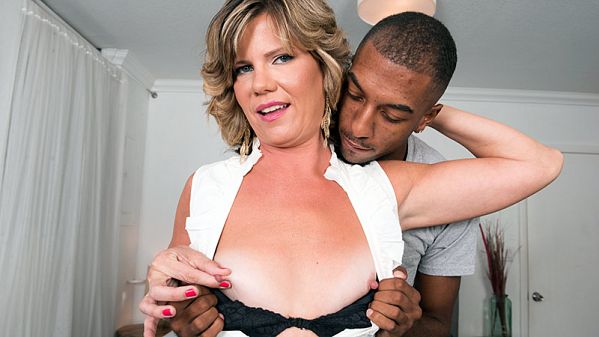 John has come looking for Jack, but Jack's not around, so 40-year-old Hanna Grace invites him in. She tells him to sit on the couch and watch TV while she does some things in the kitchen. But the TV remote's batteries are dead, so Hannah has John go upstairs to fetch some batteries.

And that's when things get interesting.

You see, John, who's only 21, opens the wrong box and happens upon Hannah's box of sex toys. And Hannah happens upon John checking out those sex toys and tells him, "I can show you how to use it."

"What about your husband?" John stammers.

"He's not going to be home for a couple of hours," Hannah says. "We have lots of time."

"You wanna play?" she says.

And before long, Hannah is sucking and fucking John's big, black cock.

And that's when things get even more interesting.

First, Hannah tells John to slide the beads into her asshole. He does as he's told, being much younger and, apparently, pretty wise, too. He pulls them out bead by bead. Hannah likes that. Then she shows him a DP cock ring: a toy that the guy slides over his cock so he can fuck the woman's pussy and asshole at the same time. In this case, Hannah does the sliding over John's cock, and John's cock and the toy do the fucking. He's in her pussy, the toy's in her asshole, and Hannah loves it.

Register your 100% Free Stripchat account today and enjoy the hottest girls and couples live on cam! No Credit Card required! No restrictions or limitations! Unlimited access to all chatrooms!