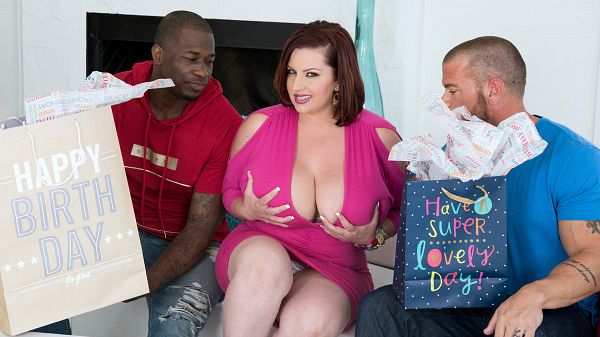 A button-popping Voluptuous fertility goddess, Paige Turner has said she likes sex with multiple men. Since she does, she gets two stud-men here--Marco Ducati and Rob Piper--as a combo birthday present.

And man, does Paige go down. Slurping, making popping sounds, squeezing his shaft and balls and licking every inch. Paige jacks his shaft and places it between her enormous hooters. "You want to tit-fuck me?" she asks Piper and he sure does. Who wouldn't? Like Milly Marks, Paige is a dynamic titty-fucker and is very vocal about it. She drools all over her chest, squeezes her breasts together with her hands and moves up and down.

Meanwhile Marco is behind Paige and he wants some of her hot mouth action. Both guys stand so Paige can take turns jacking and sucking them off. Piper gets to pipe Paige first, switching between eating her out and fucking her. Then it's Marco's turn to pole Paige as Piper pipes her mouth. It is some birthday party. Depending on how you look at it, Paige was either the gift for the two guys or the two guys were a gift for her. Either way, it all climaxes with a double load of nut sauce all over this amazing brickhouse brunette.

Register your 100% Free ImLive account today and enjoy the hottest girls and couples live on cam! No Credit Card required! No restrictions or limitations! Unlimited access to all chatrooms!